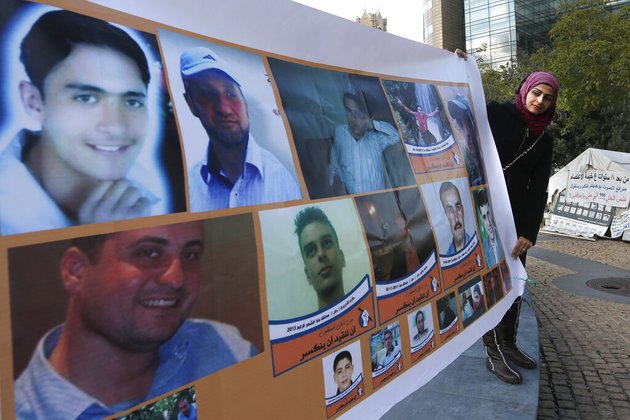 "The Assad regime has waged a ruthless war against the Syrian people, imprisoning hundreds of thousands of Syrians calling for reform and change, of whom at least 14,000 have been tortured to death," the Treasury Department said in a statement. "More than 130,000 people reportedly remain missing or arbitrarily detained" by Syrian government security forces, the statement added.

The Treasury Department also imposed sanctions on a Syrian armed group, Ahrar al-Sharqiya, and two of its leaders for abuses against civilians.

Ahrar al-Sharqiya, which is active in northern Syria, has committed numerous crimes against civilians, particularly Syrian Kurds, including unlawful killings, abductions, torture and seizures of private property, according to the Treasury.

The armed group has also incorporated former members of the Islamic State terror group into its ranks, the Treasury said.

"This action demonstrates the United States' strong commitment to targeting human rights abuses in Syria, regardless of the perpetrator," she added.

Rights experts said these designations showed a balanced approach by the U.S. government to what has been taking place in Syria for years.

"The Syrian regime and rebel groups such as Ahrar al-Sharqiya alike have committed grave human rights abuses across Syria. Exposing them is a very positive move by the U.S.," said Bassam al-Ahmad, executive director of Syrians for Truth and Justice, an advocacy group that documents human rights violations in Syria.

"There are many other armed groups in Syria that have the same ideology as ISIS [IS], and the U.S. should target them as well," he told VOA.

What is Ahrar al-Sharqiya?

Ahrar al-Sharqiya became a prominent militia in the Syrian conflict after a Turkish-led incursion into the mostly Kurdish region in October 2019. The Syrian group, along with several other Turkish-backed factions, controls parts of northern Syria.

Ahmad al-Hayes, commonly known as Abu Hatem Shaqra, one of the group's two leaders targeted by the U.S. sanctions, is directly complicit in many of the militia's human rights abuses, the Treasury said.

It added that al-Hayes commanded Ahrar al-Sharqiya's prison outside Aleppo, where hundreds of detainees have been executed since 2018. He has been implicated in the trafficking of Yazidi women and children and has integrated former IS members into the ranks of Ahrar al-Sharqiya, according to the Treasury.

Aykan Erdemir, a senior analyst at the Foundation for Defense of Democracies in Washington, said the Treasury's designation of Ahrar al-Sharqiya sent a strong message to Ankara.

The "partnership between the [Turkish President Recep Tayyip] Erdogan government and Ahrar al-Sharqiya has prompted Ankara to turn a blind eye to the militant group's numerous crimes against humanity targeting ethnic and religious minorities in parts of northern Syria under Turkey's direct or indirect control," he told VOA.

Erdemir added that Washington's designation of Ahrar al-Sharqiya showed that "the Biden administration's patience is running thin when it comes to the Erdogan government's utilization of former jihadists as proxies in Syria in ways that undermine U.S. efforts against ISIS."